Ok, it’s no secret that I am a fan of the speedo. I think just about every gay man is, but how did this Aussie icon come about?

It has been 50 years since Peter Travis first designed what was to become an Australian icon and a symbol of the Australia lifestyle. Peter was not aware of the world wide phenomenon he was about to create. His intention was to create a swimsuit that was practical and easy to swim in. Swim suits in the 50’s were cumbersome uncomfortable designs made from cotton and consisting of a tank top and shorts, hardly practical for swimming in the surf. 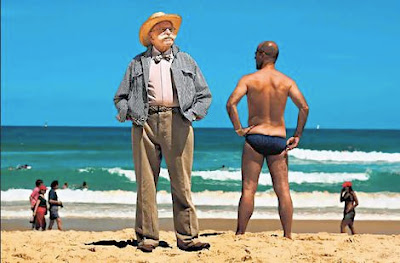 In an interview with Ani Lamont for the Sydney star observer, Peter (pictured above) said “It was designed quite practically, not with fashion in mind. I realised you shouldn’t have anything around your waist that would twist when you swim. The only way you could stop that would be to end the cut on your hips. It’s designed as a purely functional object.”

When Speedo Australia first poached Travis in 1960 he entered a company desperately in need of a new vision. Speedo was still producing old fashioned swim suits.

“The first thing they showed me was a pair of shorts and a shirt with a Hawaiian motif. I said ‘I’m sorry but in the next year, everyone around the world is going to have this. A good designer never follows anyone. I will create you a new fashion… I want to design a swimsuit you can swim in’.”

And create he did. 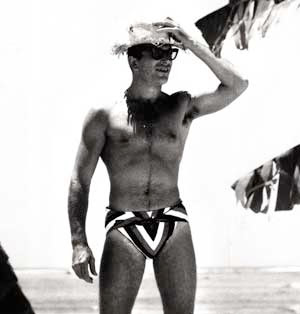 The original range came in 3 sizes for varying degrees of modesty. The first group of men to wear the suits were arrested for indecency by the Bondi beach swimsuit inspector. Fortunately a wise magistrate ruled that as there was no pubic hair showing no harm was done.

As word spread about the controversial new suits young Australian men were eager to get a pair.

Travis when confronted with board shorts says “real swimmers wear briefs. I call those poop-pants.”

Furthermore he says “I’ve heard people saying things like, ‘oh that fat old man looks terrible in a pair of Speedos’, and I don’t like that. The point is, he looks just as bad in anything else, but he shouldn’t be criticized because he wants to wear something to swim in. He’s not there for people to look at. Why shouldn’t a person who wants to swim wear that and not be criticized?”

I for one am grateful for Peter Travis vision and when you think about the millions of pairs of speedos around the world now I think the world is a much better place for it. The image of the Aussie lifesaver in a speedo is as iconically Australian as the speedo itself!

3 thoughts on “How the Speedo was born.”


It’s a privilege to serve Sir.

Cases are dropping fast. Got to stay careful but w

I’m claiming this room for Only Fans but it’s